how strong do you place the warriors of U13?

I think King vegeta is really strong as he held against the blast of broly's but cell jr did not. same with kakarot. so they are probably USSJ/FPSSJ.

nappa's only chance vs frieza is probably oozaru. so oozaru nappa is comparable to final form frieza, and oozaru raditz probably a bit stronger. raditz did say in the novel he hoped to transform to ssj during the tournament. i hope for ssj raditz vs king cold and king vegeta vs cell jr.

What I want to know is how Kakorot U13 became a Super Saiyan. I can see Vegeta reaching that level against Frieza, but Kakorot?

I'm more curious as to why all of them are as powerful as they are. Vegeta became strong because of his defeat by Goku and company, and then continued to grow stronger because he wanted to obtain immortality in order to challenge Frieza. If Vegeta hadn't first learned about the dragonballs from Raditz and then had his power boosted dramatically by recovering from the wounds obtained during his battle with Goku, he wouldn't have tried challenging Frieza.

Hyp3rB14d3 wrote:I'm more curious as to why all of them are as powerful as they are. Vegeta became strong because of his defeat by Goku and company, and then continued to grow stronger because he wanted to obtain immortality in order to challenge Frieza. If Vegeta hadn't first learned about the dragonballs from Raditz and then had his power boosted dramatically by recovering from the wounds obtained during his battle with Goku, he wouldn't have tried challenging Frieza.

Nappa and Raditz didn't seem that much stronger.

They seemed to be following the Dabura vs. Cell fight fairly easily.

yeah and didnt seem all too concerned with the show of power from both. maybe raditz and nappa are comparable to 17 and 18 in their oozaru form. maybe stronger. and U18 stated nappa was old but still way stronger than he was in the main unvierse.

i think they fought more threats after frieza and had to keep getting stronger.

Maybe they fought Coola and Cold too. That would be interesting IMO

Oozaru: 10x
Ssj: 50x
Assj:10x
Ussj: 2x
Ssj2: 2x the Ussj or the Fpssj(I believe the Ussj and Fpssj has the same multiplier but the Fpssj don't have the disadvantage of velocity decrease).
Ssj3: 4x more the power of Ssj2

------------------------
1- I'm not sure but I think I read somewhere that Salagir stated(And I agree entirely) that Saiyans cannot win Freeza and his family in their base forms, they need to transform in order to defeat them, and I personaly can't imagine goku and cia in their base form having more than or over 120 millions level of power, that would put their power levels when transformed too high, but it's my speculation, their base form could be indeed much more than this but in this manga their powers in base form can't overpower Freeza, stated by Salagir. But I can see anyway Goku on his base form crushing Freeza but using a kaioken.

2-In the novelization, during the lunch break, from what i understood the other saiyans were laughing of Nappa's certain defeat because as you know he is scheduled to fight Freeza on the next round and since he can't go SSJ Kakarotto stated that Nappa cannot defeat Freeza and then, after a moment thinking, Nappa said that he has a plan to win, probably going Oozaru, that multiplies his power by 10, so my guess is that Nappa could equal with Freeza in power in Oozaru transformation or maybe Nappa could be slightly strong than him and is gonna kick Freeza's ass.

3-Vegeta and Kakarotto power's are speculations but since Nappa is weaker than them so my guess is that above, about their Base to Assj power levels, even in base they could crush Nappa but if Nappa goes Oozaru they would need to go Oozaru too or go Ssj to crush him.

4-Well, Raditz power is speculation of my part too, but since he is the weakest of the group he probably has over this level of power.

5-I don't believe Vegeta and Kakarotto have achieved the Full-power Super Saiyan form, IMO they don't have the talent and the experience of Goku(U18) plus they are too agressive so these forms(ASSJ and USSJ) fit them very well. I may be wrong but even Vegeta(U18) didn't achieve this perfectly control of the SSJ(although he has the SSJ2 form).

6-I don't know the transformation multipliers that Salagir are using. 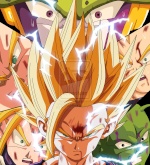